If you’ve ever wondered your way around a game’s graphic settings, chances are you have probably noticed a synching option within those settings, perhaps you have wondered what this synching technology would do and what is G-Sync vs V-Sync compatible.

When you want to purchase a gaming monitor, you have already heard about this technology. Then you have absolutely no idea then don’t worry, in this article, we will tell you everything that you need to know about this graphic syncing technology; what it does, how much difference it makes, and whether you should use it or not.

Firstly, we have to understand what the term ‘syncing’ means. Syncing refers to being matched up altogether or occurring simultaneously. Syncing ensures that everything is happening at the same time as it should with each other.

Why You Should Use Graphic Syncing Technology?

The important question that needs to be answered here is why should you use this graphic syncing technology. The best way to answer this question is to paint the whole scenario right now right here.

Say you are a gamer and every gamer wishes to have the best possible gaming experience as it is possible. What gamers do not want to compromise on even a little bit is the visual experience and the attention to detail.

So let’s say you also do not want to compromise on the visual experience but you are limited when it comes to the budget as to everyone can afford to buy an expensive gaming monitor.

If you have a 60 Hz monitor and your GPU is putting out more frames per second than what your monitor can handle this would result in something called screen tearing.

Screen tearing is when your monitor is still busy loading a previous frame while at the same time your GPU pushes out another frame for it to load, this causes a mismatch between the GPU’s frame rate and the monitor to refresh rate.

Hence mismatch results in the monitor showing you a distorted image. This is where these graphic syncing technologies come in to save the day.

There are 3 types of syncing technologies, namely; V-sync and G-sync. Each has its own advantage and disadvantage which we will discuss as we go on to explain each graphic technology.

Vertical synchronization or V-sync is a graphic syncing technology. What V-sync does is that it limits your GPU to match and put out the same number of frames as the monitor’s refresh rate.

So if your monitor has a 60 Hz refresh rate then your GPU would also push out 60 frames per second, this will ensure that you get a smooth gameplay experience without any visual problems.

If you have a V-sync option available with the games you play, you should definitely switch it on.

However, there are downsides to this technology. When you turn on V-sync, then what this would mean is that you are limiting the full potential of your GPU. Hence, your GPU will not be able to perform to its fullest potential.

Another problem that V-sync might introduce is input lag. Input lag is the delay between the input that you give to the computer and the output that is shown on the screen.

This could cause inconvenience especially when you are playing fast-paced competitive games because in a certain scenario you would need to have the fastest responses and encountering input lag would certainly put you at a disadvantage.

V-sync could also result in stuttering. it happens when your frame per second drop below the monitor’s refresh rate. This could happen when the game moves on to a visually and graphically intense scene.

Let’s say you have a 60 Hz monitor and if the GPU drops to or below 30 fps then this would result in stuttering. Stuttering is short delays between the GPU’s fps and the image shown on the monitor.

G-sync is more advanced than V-sync. G-Sync eliminates all problems that are caused by v-sync such as screen tearing and screen stuttering.

It is made possible because, unlike v-sync, G-sync adjusts the monitor’s refresh rate to match the frames per second that the GPU is putting out. It works opposite to the traditional v-sync technology.

This chip is what adjusts the monitor’s refresh rate accordingly to the GPU’s fps.

This modification eliminates all the problems that come with V-sync, the only pre-requisite is that an Nvidia display must be paired with an Nvidia GPU. Also, G-sync is compatible only with certain GPUs, such as GTX 650 Ti or higher models.

Are G-sync And VSync The Same?

The gap between both Vsync is a software setting accessible within a game and G-Sync is a totally different piece of technology built into a monitor. That means you get V-Sync for free as long as you buy the game with that option. It’s just attitude.

Does VSync Need To Be On With G-Sync?

Although, Some players have noticed tearing even with these settings, especially at the bottom of the screen. If this happens to you, 1st go to turn on Vsync alongside G-Sync and limiter the frame rate.

If there is a problem syncing your monitor with the game. VSync will try to find a possible point by drastically reducing the frame rate. That may lead to entering lag and stuttering increases, which worsens the gaming revel.

Is VSync Good For FPS?

When it works intentionally, VSync is a serious setup. Not only does it give you a better gaming experience by stopping screen tearing, but it also prevents the GPU from being overloaded by trying to render just enough game-breaking frames.

Although V-sync comes with its disadvantages, nevertheless, it is more versatile and does not have as many restrictions as G-sync. It is also more affordable and a great option if you are on a budget.

On the other hand, G-sync is a much better alternative overall. It does not only provide you with the maximum performance of your GPU but also eliminates all downsides there are to V-sync technology. We recommend G-sync over V-sync if you have the budget.

We suggest you look into V-sync compatible options if you want the best gaming experience on a budget and if you are not bothered by the occasional compromise on the performance.

But if you have the capacity, you should definitely look into G-sync as it will give you a far superior experience overall.

This is the best option if you are looking into entering the competitive gaming world as this will provide you with an edge over non-G-sync players.

Can I Remove The Laptop Screen And Use An External Monitor?
How to clean a monitor screen?
Are Portable Monitors Worth For Gaming?
What is best resolution for gaming? 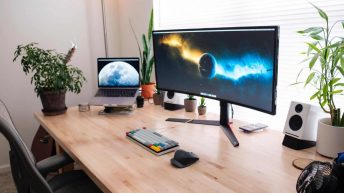 How Do I Force My Laptop To Connect As An External Monitor? 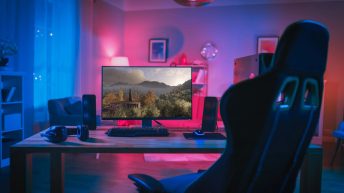 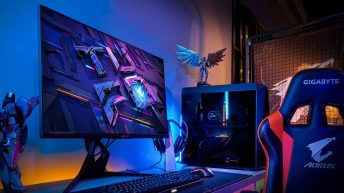